HAVING a GO
at KUMIHIMO! 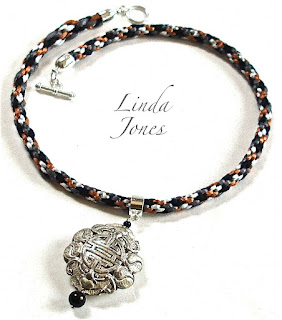 I'm looking forward to a few relaxing weeks ahead
in the sunshine, a break from work and a proverbial
recharging of the human batteries!

In the summer weeks ahead, I thought I would teach
myself a new technique that I can add to my jewellery skills
and so, after admiring many beautiful Kumihimo designs
on the web, I thought it would be fun to give it a go!

Most of you probably already create stunning Kumihimo
works of art, but if you're like me, just starting out, here's
a very brief history:

The term 'Kumihimo' actually means intersected threads
in Japanese, referring to any type of braid created using
the loop-manipulation.  It has a very long history in
Japan, with early examples dating back to 8000-300BC!

Over the centuries, it has become an integral part of
Japanese culture, used to tie prayer scrolls, lacing devices
for the samurai armour and used as embellished decorations
over Buddhist statues.  Originally it was created on specialised
wooden stands, but more recently, a round disk tool with
bobbins was developed, created out of flexible foam and
this has given the craft a universal following and appeal.

I'm not going to bore you with any more technical or historic
information, as there is plenty you can thumb through on the
internet and in craft books dedicated to the subject.  I just
wanted to share with you, my very first attempts! 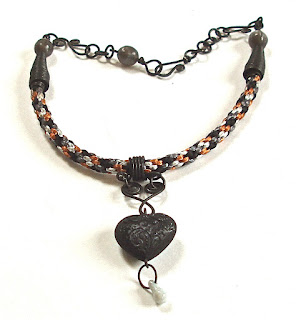 Once I got the hang of setting up the disk, I attempted the simplest
of braiding patterns: moving the top right braid to the bottom
right slot and bottom left braid up to the top left, then quarter turn and
repeat ... I was away! The repetitive rhythm of the task was very
soothing and the result was rewarding.  I also found, that having some
wire skills was useful when needing to create fasteners, end caps and
linking systems. 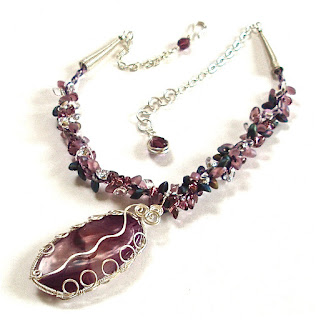 My next attempt was braiding with beads. These gorgeous purple
coloured petal shaped beads (above) hide a multitude of braiding
mistakes! I didn't find it easy to push the beads down into the braiding,
but 'hey ho', where "there's a will, there's a way!".  I'm not going to show
you the next mess I made of a further attempt, using seed beads!
Just to say that the air turned a little 'purple' after all the threading of
100's of tiny beads, then the bobbin attachment and winding,
followed by the bobbin unwinding and the tiny seed beads rolling all
over the kitchen floor ... !!! Arghhhh!

Give me WIRE any day to play with, rather than tiny glass beads!

So back to experimentation with colourful ribbons: 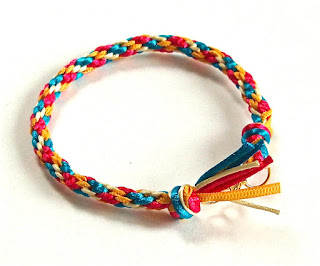 Cotton cords with a bead woven in: 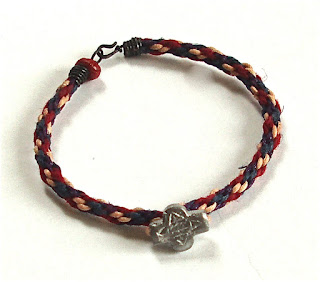 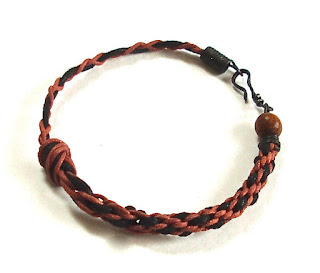 With a few errors, I finally created a bangle with
seed beads: 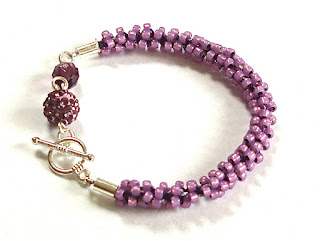 Then with interspersed beads - which I looks like it should
be called a 'Harlequin Bangle'! 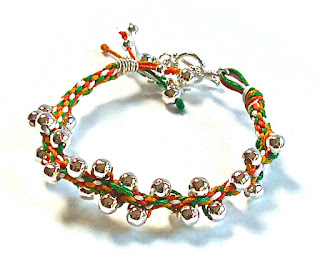 Plus, I also had a go with 0.5mm coloured wires! 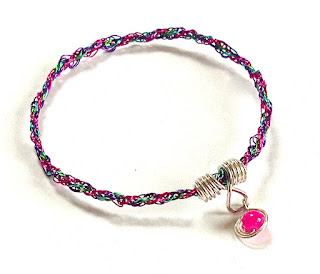 It didn't work for me, however, I did find an amazing tutorial
on You Tube that could be something to have a go at in the
future!


Anyhow, all in all, I can see that the braiding will look great
for attaching my wire and metal pendants and it will be a lovely
technique to share with my young nieces, who love spending
a day, crafting with 'aunty'! 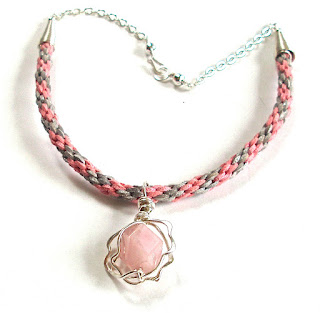 I'll be back in September for more jewellery inspiration!